Why and how we travel 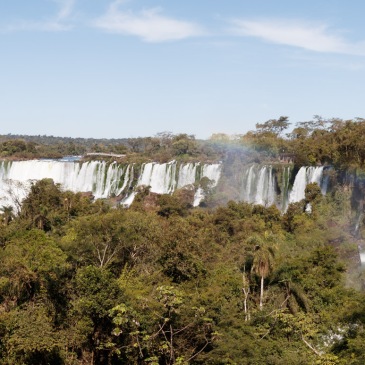 In the language of the Guarani people, who are the original inhabitants of this slice of sub-tropical jungle, Iguazú means big water.  This is an understatement!  The 275 waterfalls that comprise Iguazú Falls produce enough water to fill five Olympic-sized swimming pools each second.

The falls sit at the border of Argentina and Brazil, with Paraguay a stone’s throw away, in the subtropical Itaipu jungle.  If you are in Argentina, it is most definitely worth budgeting at least two days for the falls.  Group tours abound, but we organized our trip on our own.  Below are some tips and ideas for enjoying Iguazú.

Getting to Puerto Iguazú from Buenos Aires is simple and relatively affordable.  There are multiple flights each day out of the national airport, known as the Aeroparque, which is conveniently situated in the center of Buenos Aires.  After a short plane ride–under 2.5 hours–you’ll find yourself a whole world away.

There are many lodging options in Puerto Iguazú and the surrounding Itaipu jungle.  We stayed at Village Cataratas, right in the jungle. The grounds of the hotel balanced a campy, jungly feel with modern, updated amenities and good service.  While the hotel restaurant was sufficient, take a cab into Puerto Iguazú to try out some of the restaurants there.

We did not arrange an airport transfer prior to arriving at the Puerto Iguazú airport, but once we landed, we lucked out with a great taxi driver, who not only drove us to our hotel that first day, but who also provided all of the transportation for our stay, including transport to the Argentine national park, the Brazilian national park and back to the airport.  This turns out to be pretty common and is a great way to get learn about the region from a local expert without having to commit to a group tour.

You can only access the falls via the national parks on the Brazilian and Argentine side. The Argentine Parque Nacional Iguazú is a 20-30 minute taxi ride from most Puerto Iguazú and Itaipu jungle hotels.  Be prepared to pay your entrance fee in cash.  Once you arrive at the park, you can stop by the visitors’ center and then take the jungle train, which is included in the entrance fee, up to the trails and viewing areas.  The park consists of a few miles of metal walkways (generally handicap and stroller accessible) that allow you to view the falls from above (superior trail) and below (lower trail).

The Brazilian Parque Nacional do Iguaçu is about an hour taxi ride from Puerto Iguazú.  (U.S.-based travelers should recall that American citizens need a Brazilian visa to enter Brazil, although this was suspended this summer for the Olympic Games).  Once you get to the park, you can buy your tickets and hop on a bus, which will take you to the main viewing area.

We spent a full day on the Argentine side and a half-day on the Brazilian side and would recommend doing the same.