Let’s just begin by stating the obvious: 14 hours can feel like forever when you’re stuck in an airplane seat. But, when you’re 3 and can cuddle up to your mom and doze off or when you’re 6 and can play on your Kindle and fall asleep against the window, 14 hours isn’t that long. When you’re an exhausted working parent you can pretty much fall to sleep the second you see a chair, never mind sit on it. All of which is to say, the flight between Chicago and Japan was long but perfectly fine.

While 14 hours seems manageable for a flight, it turns out that a 14-hour time change can be a real challenge for a pre-schooler. We are a week into our time in East Asia, and W is still not fully adjusted. The first few days both girls were falling asleep around 2 pm in Japan (so midnight back home) and were bears when I woke them after a nap at 4. W would fall asleep again around 6:30 each night, too tired to eat dinner. Then, of course, she would wake up at 2 or 3:00 in the morning, ready to go. Each day she’s gotten up progressively later, meaning that today, after a whole week, she slept in until 6 am! For the first time today, we also managed to keep her awake until 8pm. Slowly, slowly we are getting back to normal. 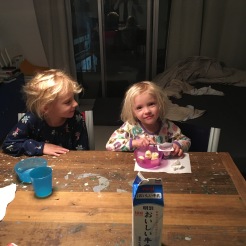 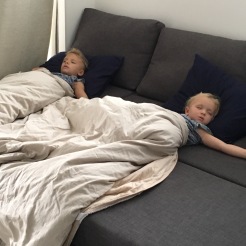 We have been settling into a decent routine of getting up early, eating breakfast #1, reading or watching a movie, eating breakfast #2 at a more reasonable time, and doing schoolwork. We want to make sure the girls are keeping up with what’s going on at school, and both of their teachers have been wonderfully supportive. Each morning, N spends some time reading, writing and doing the assignments her teacher sent home for us. W does a page or two in her “workbook,” although she usually ends up doing a drawing in her journal. She always has a friend in mind when she works in her journal, which is very sweet. Since she is new to her preschool, it is a relief for us to know that she is connecting with the other kids there enough to want to bring them home artwork, letters and other treasures. C and I have learned that we can’t do our work while the kids are doing theirs, so we preserve this morning time for the girls’ homework and then do ours either in the early afternoon or take turns to be the parent “on-point.”

While I was off conducting interviews for my book, C and the girls spent time getting to know the playgrounds and cafés around our neighborhood, Azabu-juban. The rest of the time, while C was at his conference, N, W and I went out on the town.

The girls and I spent each morning and late afternoon/evening in Tokyo going out to different spots and sights. We took the metro everywhere, which was in turns fun, efficient, frustrating and, by the end of our time in Tokyo, quotidian. It was great to see the girls, particularly N, get really excited about the metro and about public transportation in general. This is especially true because when I was in my teens and twenties, I would tell anyone who asked and many, many people who didn’t that I was, “all about public transportation.”

Anyhow, N was a true helper on the subway. While the Tokyo subway system is one of the most efficient public transport systems in the world, it can be a challenge to navigate with two youngish kids during rush hour and when one of said kids is passed out from jet lag in a $20, too-small umbrella stroller you bought at Target and already lugged around the Southern Cone, leaving its wheels wobbly. Hypothetically speaking, of course.* We had a nice thing going, N and I, each evening after W fell asleep in her stroller: we would start the subway ride home, keeping our eyes peeled for signs for the elevators, or otherwise, lugging W and the stroller up the occasional flight of stairs. It was such a small thing but it was a nice time together and I’m happy to know that if needed, N could navigate this beast of a public transport system. 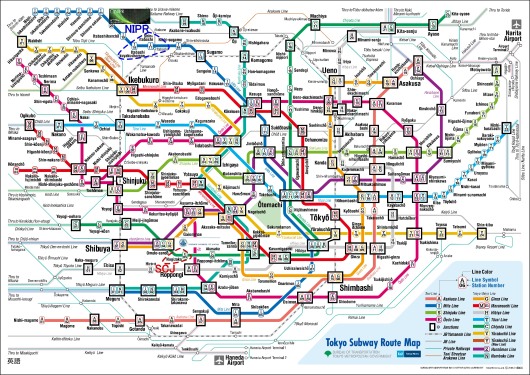 For our morning adventures, we tended to go to historical and cultural sights. The first day we went to Senso-ji Temple, which was the first time any of us had experienced a Buddhist temple. The next day, we went with C at the very crack of dawn to Yoyogi Park and the Shinto Meiji Shrine.  Because we were up so early, we got to see the park pretty much empty, save the occasional pilgrim making his or her way to the temple before work. 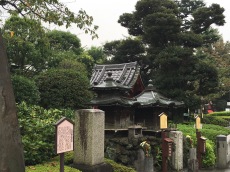 Afternoon adventures tended to be less cultural and more capitalistic. That’s not to say that we bought much but rather that each day we headed to one of Tokyo’s many mega-shopping centers to enjoy the activities there.

The first day, we went over to Roppongi Hills, which was the next subway stop up from our

neighborhood of Azabu-juban. It’s an enormous shopping plaza, with everything from a Lego Store to its own art museum. The plaza also has an observatory deck on the 52nd floor, which is how we whiled away our afternoon. The view was spectacular and we enjoyed trying to identify other landmarks from high above. Another day, I took the girls to Kiddy Land (which, if there is a parenting fairy out there keeping track of parental sacrifices, I’d like to make sure this one is in my file). Kiddy Land is like FAO Schwartz, but with more manga. The girls loved strolling through the aisles, checking out all the toys and kitsch. We (miraculously) left with only key chains and charms.

On our last day, we took the monorail over to Odiaba Island. Crossing the Tokyo Harbor on the Rainbow Bridge opened up beautiful views of the city, which we most enjoyed from the top of this 35-story high Ferris wheel!

We Will Be Back!

We only spent five days in Tokyo, and there is so, so much more left to explore, but we had a chance to see a number of different sides of the city, from ancient temples to modern sky rises. Moreover, we were able to have a new adventure, and as always, it has been a pleasure watching the girls adapt to a new place and to enjoy their time with each other and with us.

*The stroller was driving me bonkers, and I was really regretting not bringing our normal one, so I ended up schlepping the kids all the way to Odiaba Island under the guise of the Ferris wheel so that I could buy a new, functioning stroller at the Babies R Us there.