Why and how we travel

In my last post, I mentioned that I was somewhat underwhelmed by our time at Welli-Hilli Park. In Seoul, I had precisely the opposite reaction. The town was buzzing, and the combination of a pulsing modern city with well-preserved historical and cultural cites, checked all of my tourism boxes.

Our week in Seoul started on a high note: a lovely Airbnb complete with actual beds with actual mattresses—no marble here. The two-story apartment had a full kitchen, a well-appointed living room and a cozy little terrace where the girls could do their homework or play and look out at the mountains. And did I mention actual mattresses?

I spent our first full day in Seoul giving a talk at Sungkyunkwan University. I also had the chance to catch up with colleagues I’ve met before and to meet new scholars. My talk bridged my 2014 book with the book I’m currently writing, and the questions, comments and conversations I had that day were so helpful and constructive and just plain fun. I’m also really excited about the human rights research coming out of the Seoul-based SSK Human Rights Forum. 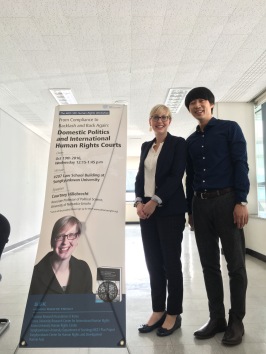 I’ve never been on a poster before! 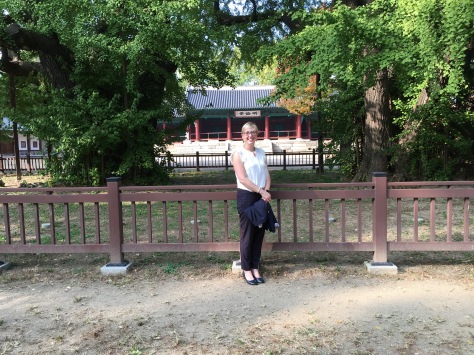 In front of the famous Ginko trees on campus.

In addition to discussing new and cutting-edge research, I also got a tour of the university, which, at over 600 years old, is the oldest university in East Asia. It was established during the early days of the Joseon Dynasty as a way to promote Confucian scholarship and still emphasizes the importance of education in improving oneself in order to improve society. The idea of using our education for the collective good really struck a chord, and, of course, is one of the reasons that I am proud to be an alumna and employee at two land-grant universities back in the U.S.

The contrast between old and new, ancient and hyper-modern that I experienced at at Sungkyunkwan was everywhere in Seoul, and my inner history-major was geeking out. And I wasn’t alone: we saw hundreds of (mostly) young women out and about wearing traditional Korean dresses, called hanbok. These ladies would go out for the day or

the evening in their finest traditional gowns, which you can rent on pretty much any corner (and for a lot cheaper than a kimono in Japan, in case you were in the market for one or the other). At the same time that they were bustling through the Seoul’s most important palaces and historic landmarks in their traditional finery, they were also wearing Nike’s and taking selfies. My girls just adored seeing all of these beautiful dresses and were on constant lookout for the next pretty dress.

We spent a fair bit of time at two of the main palaces in Seoul: Gyeongbokgung and Changdeokgung. The palaces are beautiful, certainly, but the aesthetic is very different than what most Westerners think of when we think “palace.” While there are certainly commonalities with both Japanese and Chinese styles, the South Korean palaces and their grounds were different in the importance placed on open spaces and on aligning the built environment with the natural one.

This relationship between architecture and nature is really on display in the grounds of Changdeokgung. (FYI – If any of you are also trying to “bucket list” UNESCO World Heritage Sites like I am, Changdeokgung is one.) The grounds are called the “Secret Garden,” and you can only visit them on a tour. Going into the tour, I was anticipating either a, well, Secret Garden-style secret garden, or a Japanese-style garden. Instead, the garden was really an enormous park, comprised of countless buildings, temples, ponds, pools and paths. It was well tended but not overly manicured. Cohesive but not cloying. In short, it was breathtaking. If you end up in Seoul, make this a priority, even if you’re not a “tour” type of traveler.

After spending most of the week in Seoul, we decided to see where modern history met contemporary geopolitics: the Demilitarized Zone (DMZ). The DMZ is the strip of land between North and South Korea that has been in place since the end of the Korean War. I was initially skeptical of bringing the kids to the DMZ, in no small part because of having spent some time last summer at the Gaza border crossing in Israel and the Occupied Territories. That was no place for children, and I had expected the DMZ to be similar.[1]

I was so very wrong. Funny how that keeps happening. We went on a half-day guided tour, which is the most efficient way to access the major sites along the DMZ. Most tour companies also offer full day tours, which include a stop at the Joint Security Area, which is the only place along the DMZ where North and South can stand face-to-face. Given the strategic importance and security implications of any missteps there, the rules require that all JSA visitors be over 10 years of age.

The first stop on our tour was Imjingak Park, where you can look out toward North Korea; see the unity bell, which will ring when North and South Korea are re-united; and…ride on some carnival rides. Yup, carnival rides. The park was bustling with campers, tourists, bicyclists and lots of others.

Following the Peace Park, we went to the Third Tunnel, which was the third of four infiltration tunnels leading from North to South Korea that the South Koreans discovered between 1974 and 1990. Before seeing the tunnel, we sat through an obligatory five-minute video that gave the history of the tunnel and juxtaposed over-the-top graphics of Seoul exploding with placid nature scenes of all the wildlife that has taken hold in he DMZ since the end of the Korean War. It was an odd video and a scary one: W asked a few times about the explosions. Family Photo at the 3rd Tunnel

We took a tram down into the tunnel (about 400 meters down) and then walked another 400 meters in the tunnel. Seeing the tunnel put into perspective both the seriousness of North Korea’s efforts to infiltrate South Korea during that time and also the daunting reality of digging a tunnel wide and deep enough to carry enough troops and materiel to actually take down Seoul.

Again here, though, this was a meticulously well-kept tourist destination. Aside from the tunnel, the only indication that this was part of one of the world’s most intractable conflicts were the land mine flags scattered on the grassy hills just outside the site grounds. Bonus: not only did the girls learn about infiltration tunnels, but they also learned about land mines. They now know that children are often the victims, losing limbs and life to the deadly devices while they are out playing or working in fields that have yet to be de-mined. We’ll just call that #mymomisapoliticalscientist.

The last two stops on the tour were again a study in contradictions. Our penultimate stop was as the Odusan Observation tower. From here you can look out into North Korea, which is to say, into the vast expanse of nothing more than a contemporary Potemkin village and craggy hills that have sacrificed many of their trees in North Korea energy crises.

Our last stop, though, was largely one of unbridled optimism: the Dorasan train station. This sleekly designed train station was meant to connect Seoul with Pyeongyang via rail, but no trains have ever let the station headed toward the North Korean capital. A train runs daily between Dorasan and Seoul, but instead of being a connecting point, Dorasan is quite literally the end of the line. And yet, there is something optomisic about the Dorasan station and about these tracks that are just waiting to be used. It illustrates the indefatigable human spirit. In spite of 60 years of conflict and light years of political distance between North and South, there is still hope that one day, this arbitrary border in its entirety will be a relic of history.

Our stay in Seoul turned out to be just what we needed. My work there went well, and I hope it will provide the basis for future collaboration. The apartment gave us space, comfort and convenience, which after three weeks in tight quarters, we all needed. We learned so much about South Korea’s history and contemporary culture. And, we even had the chance to slow down a bit and reconnect with our friends and family at home. All in all, this was a great way to wind down our time in South Korea and regroup from Hong Kong.

[1] I would say that the DMZ is more similar to the Israeli-Syrian border in the Golan Heights, which the Israeli government has tried to promote as a recreation area in order to boost national support of protecting the region from its neighbors. That said, in terms of personal security risks, the risks at the DMZ, assuming you are following the rules are minimal to non-existent: stay with the tour, don’t wander off into areas that have not been de-mined and don’t be noticeably drunk (this is warned against so frequently that it must have been a problem on more than one occasion). The Israeli border poses different challenges, including but not limited to Hamas activity in Gaza and ISIL and Jabhat al-Nusra in Syria.