If you’ve ever said, “Gee, I don’t much like flying” or “Four hours is a really long time to be in an airplane,” or “Wow, that three hour time change is really getting to me,” I would not recommend traveling from Hong Kong to São Paolo, Brazil.

There were no direct Hong Kong-São Paolo flights when I made our travel arrangements, and at the time of booking, we had our choice of connections in Munich, Chicago, or Johannesburg. The Munich connection was the longest and most expensive, so that was out. With Chicago, I was afraid that if we got to O’Hare, we wouldn’t have the willpower to jump on another 12-hour flight and would instead end up in the F terminal, en route to Lincoln. So, Johannesburg it was! We had a 13-hour flight on South African Airways between Hong Kong and Johannesburg that was generally smooth and quiet. The girls mostly slept and watched movies, and the time passed by quickly enough.

Once in Johannesburg, we cleared customs and immigration relatively quickly and spent a few hours in the Star Alliance lounge. To the people who put both showers and a kid’s play area in the J-burgh lounge: thank you, thank you, thank you. It made all the difference.

Relaxing between the flights.

Compression socks are very important for the 3 yo set.

We were feeling refreshed and relaxed when we boarded our 10-hour flight to São Paolo. In case you didn’t do the math, that’s 23 hours in the air. We were feeling decidedly less refreshed and relaxed by the time we got to Brazil, but everyone did well until we reached immigration at Garulhos. The girls just couldn’t keep it together any more, which I suppose is fair enough. Not only had we been traveling for more than a day, but the 10 hour time difference meant that we had to manage immigration and luggage and the like in what felt like the middle of the night. Luckily it was just a quick jaunt to the hotel we were staying for the night before heading to Ihla Bela the following day.

After a good night’s rest, my friend R picked us up at our hotel to drive out to Ihla Bela. Because it was Halloween, and she knew that the girls had missed the holiday, she came prepared with two big bags of Brazilian candy, which helped pass the time as we wound our way through the mountains and toward the coast. After a quick ferry ride, we arrived at R’s family hotel: Hotel Pousada Ilhasol. After a little rest, we went for a walk on the beach and had a quick dinner. Then, bed. We had been up since 2:30 in the morning with jet lag, so a good night’s rest was needed all around.

Our first full day at Ihla Bela was spent at a beach on the continental side of the island. The water was clear and calm and the beach was gorgeous. We spent the day swimming, climbing rocks, eating ice cream and drinking mojitos. Not too shabby. 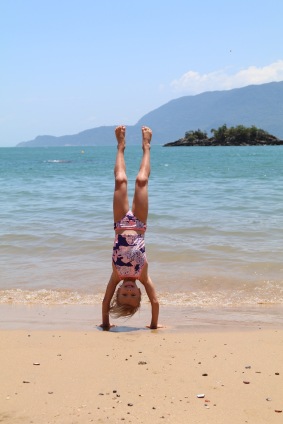 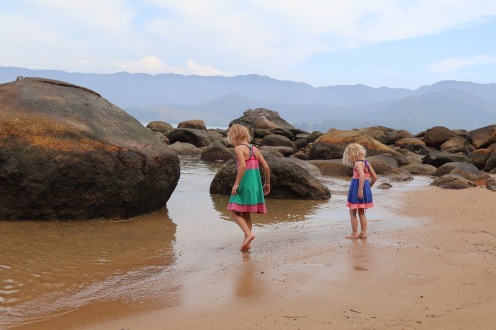 Our second day at Ihla Bela was a bit more adventurous. Much of the island is a protected nature reserve, which makes getting to Praia de Castelhanos on Atlantic side of the island difficult, and intentionally so. And by difficult, I really mean nearly impossible. Most people get rides in large jeeps with wheels the size of an average adult male. Not us. R had four-wheel drive and was a steady at hand at the wheel, so she was confident that her Suzuki crossover could make it over the mountains that stand between the island’s continental beaches and Praia de Castelhanos on the Atlantic side. The dirt road that goes up and over the mountains often gets washed away with the rain, so it was uneven terrain at best. C had to get out to push us out of a ditch a few times, and the driver of one of the aforementioned jeeps and some of his passengers kindly helped us get out of a few holes and navigate the worst of the road. They also gave us a ride across a river that stood between the road and the beach.

This was a “smooth” portion of the road.

And what a beach! I’ve really only been to crowded East Coast beaches or urban beaches in my travels and I could generally take ‘em or leave ‘em. But this. This beach was spectacular.

Secluded and almost untouched aside from a couple of very low-key restaurants, it was pretty much perfect. The water was just the right temperature, the sand was excellent for both building sandcastles and going for a little run, and the waves made for some extra excitement. 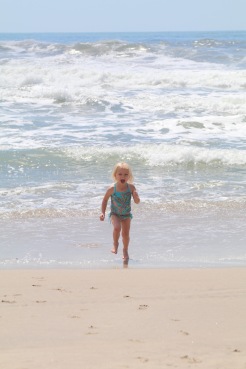 It was worth every bump along the road.